Videograms of a revolution 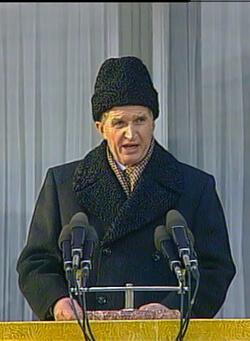 The autumn of 1989 is fixed in our memories as a series of visual events: Prague, Berlin, Bucharest. Judging by the images, history had returned. We were watching revolutions. And it was Romania, with its unity of time and place, which delivered the most complete scenario of a revolution.

Everything happened in just ten days and in just two cities: the uprising of the people, the overturning of power, the execution of the rulers. After initial disturbances in Timisoara, where the government was still able to isolate the city, the final overthrow took place in Bucharest: in the capital and in front of the cameras. For here, the Television Station was occupied by demonstrators, stayed on air for around 120 hours and so established a new historical site: the television studio. In addition, the events were recorded by amateur video enthusiasts and cameramen from the state film industry.

We have gathered all these various recordings together in order to reconstruct the visual chronology of these days. The aim was to disentangle the mass of images and to arrange sequences in such a way as to suggest that for five days, one was moving from camera to camera on one and the same reel of film.