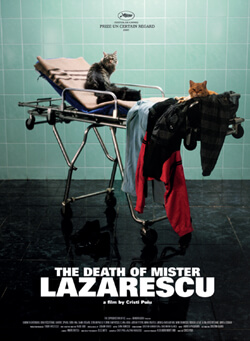 Mr. Lazarescu is not feeling well. He has a bad headache and has been vomiting. He feels that it is something more serious than the pain caused by his ulcer and the hangovers caused by his regular excessive drinking.

He calls for an ambulance, and after convincing the skeptical dispatcher that he is not simply drunk, he begins the long wait for help to arrive. Eventually, he visits his neighbors, Sandu and Miki in search of stronger pain relievers. They are busy and reluctant to help him, but eventually realize that something may
be seriously wrong with the smelly old drunkard. Sandu takes him back to his apartment, and, later, the paramedic, Mioara finally arrives.

After ascertaining that Lazarescu has been drinking to excess, she considers giving him an aspirin and going on her way, but a quick examination shows that the old man is in severe pain, and Mioara begins to suspect that he is gravely ill.

Thus begins a long, unpleasant journey from one hospital to another, as Lazarescu faces a backlog of patients caused by a massive traffic accident, and the cold indifference of arrogant doctors who appear hesitant to cure a man who has seemingly destroyed his own health.