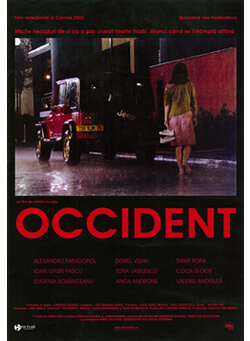 Almost everybody wants to leave Romania, where life doesn’t have too much to offer.

Luci and his fiancée Sorina, are homeless. Sorina’s father would have found a solution, but he’s been dead for several years. Sorina and Luci visit him at the cemetery and wait for a sign to come from the sky.
In the cemetery, three stories get interlaced. A bride is crying on a bench, some policemen are running on an alley, a car is driving slowly behind
the tombs. Alarmed, Sorina and Luci observe what is going on.

The sign they have been waiting for, finally appears; it is far from divine. A bottle hits Luci in the head. Fortunately, he gets to the hospital, thanks to a Frenchman. For Sorina, Jérôme is a chance to improve her situation so she moves in with him.

In an attempt to get Sorina back, Luci gets a job promoting a beer brand dressed in a beer bottle suit. This is how he meets Mihaela, who was abandoned in front of the altar and is now working dressed in a telephone suit.