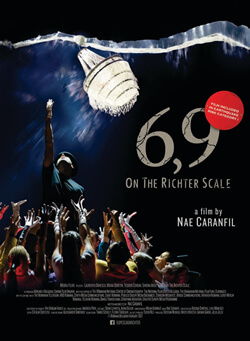 A humble Romanian actor in his 40’s, hardly surviving between a complicated part in a musical, a depressed and pathologically jealous wife, and the obsession of an imminent, devastating earthquake, becomes the willing victim of his manipulative father who appears in his life for the very first time. But in the end, what
seems like a visit to hell turns into a path of redemption as Tony’s journey evolves.

His leading role in Orpheus in the Underworld perfectly mirrors his chaotic life on the verge of collapsing. The parallel, musical world turns his apocalyptic thoughts into an explosion of sheer vitality.